The 2021 legislative session has just wrapped up week three.

Thank you to all of you who participated in my legislative survey.

I had over 690 survey responses with over 1500 of written comments.

As I read through the results I wish that I had a way of sharing the written responses with everyone, but that would take pages.

This would help you compare your thoughts and perspectives with other constituents in our Senate District 15.

Here are some of the response that might be of interest.

How do you feel about the direction of our country?
This was an open ended question and the great majority of respondents are very concerned and unsure about where our country is currently and the immediate future. 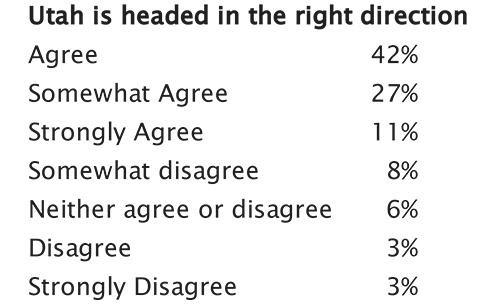 Here are some of the issues we have been working on in the Senate.

Utah currently has an “open carry” law that allows individuals who are legally able to possess a firearm to open carry in public. H.B.60 Conceal Carry Firearms Amendments, would allow anyone over 21, who is legally allowed to possess a firearm, to carry a concealed weapon in public without a concealed carry permit. Additionally, this bill would establish a Suicide Prevention and Education Fund and a portion of funds collected from the concealed carry permit class will go toward suicide prevention efforts and firearm safety. This bill will not discontinue the concealed carry permit class or change specifications on how firearms can be carried in public. H.B. 60 passed the Senate and will be sent to the House for their consideration. Listen to the bill’s presentation on the Senate floor here.

Many of the brave men and women in our nation’s military are not citizens of the United States. Though they are legal residents, citizenship is not required for them to serve. However, in Utah, those who protect our local communities in law enforcement are required to be U.S. citizens. S.B. 102 Peace Officer Training Qualifications Amendments, changes Utah law to allow lawful permanent residents who have lived in the U.S. for at least five years to serve as police officers. This change will help create police departments that more closely resemble the diverse communities they serve. S.B. 102 passed in the Senate will now be considered in the House.
Listen to the bill’s presentation on the Senate floor here.

Although Utah works hard to have accurate and secure elections, ballots occasionally are mailed to deceased voters. H.B. 12 Deceased Voter Amendments, creates a more uniform process to rectify this issue. When a Utahn passes away, the bill requires that the death certificate be sent from the state registrar to the Lieutenant Governor’s office within five business days of the certificate’s registration. The certificate will then be sent to the County Clerk’s office where the deceased name will be removed from the voter rolls. Before each election cycle, the Lieutenant Governor’s office will also cross-check each name against United States Social Security Administration data. H.B. 12 passed the Senate and House and will be sent to the governor.
To listen to the bill presentation on the Senate floor, click here.

Some people believe Utah’s current flag falls short when it comes to representing the state in a simple and purposeful way. S.B. 48 State Flag Task Force, creates a State Flag Taskforce to assess whether a new state flag should be created. Though some may think that such an undertaking is not important, a state flag can be compared to the logo and branding of a state. Most people quickly recognize the bear seen on the California state flag or the star of Arizona. An iconic state flag can be a rallying point and marketing tool for the state of Utah. S.B. 48 passed on the Senate and is headed to the House. To listen to the bill presentation on the Senate floor, click here.

In the News: Daily Herald | ABC4 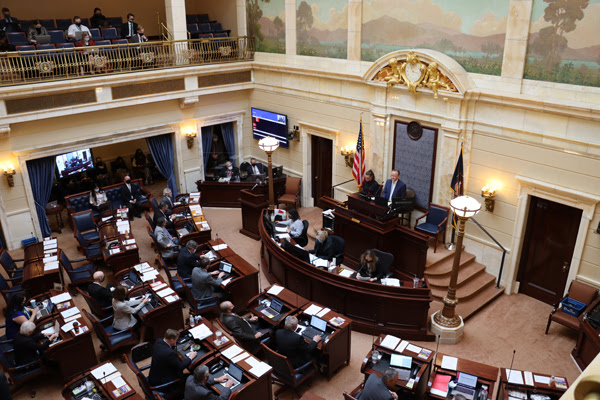 This week, we considered legislation that would make changes to the driver’s license requirements for new drivers. H.B. 18 Driver Education Amendments, would extend the term of a learner permit from one year to 18 months. This change does not prevent youth from getting their license upon turning 16. In addition, this bill would remove the required six observation hours for driver education observation for 15-17-year-olds. This bill passed with unanimous support in the Senate. To listen to the bill presentation on the Senate floor, click here.

Many adults learned about the Holocaust during their K-12 years; however, it seems this important, historic lesson is slowly diminishing in our children’s education. S.C.R. 1 Concurrent Resolution on Holocaust Education, highlights the importance of Holocaust and genocide education for students and encourages the State Board of Education and local education agencies to provide Holocaust and genocide content for schools. This bill passed with unanimous support in the Senate and will now be considered by the House. You can watch the bill presentation on the Senate floor here.

In 2018, the Utah Supreme Court ruled in Savely v. Utah Highway Patrol (UHP) that a state district court has jurisdiction over property held in civil asset forfeiture cases. The ruling stems from an incident in 2016 where a motorist had $500,000 seized by a UHP trooper without being charged with a crime. Though the money was initially seized by UHP, a federal magistrate filed a warrant to seize the money for the Drug Enforcement Administration (DEA). S.B. 98 Asset Forfeiture Amendments, clarifies the process for seizing property. Property seized by local law enforcement is to be handled in a state district court. If the local agency wants to turn property over to a federal agency, the reasons need to be explained first in a state district court. S.B. 98 passed in the Senate and will now be considered in the House. To listen to the bill presentation on the Senate floor, click here.

I look forward to hearing from you!

I can be reached by email at keithgrover@le.utah.gov. My mobile phone number is (801) 319-0170. You’re also welcome to join me at the Capitol any time.

If you’d like to meet with me in person outside of interim or the legislative session, you can reach Jason Gould at jgould@le.utah.gov. He’ll help us get in touch.

Thank you for all you do to make Utah the best state in the nation – and thanks for paying attention.