Here are some issues of interest discussed this week with a question at the end:

There isn’t a clear procedure or law clarifying liability when a dog that is wandering is injured or killed when encountering another dog in an enclosed or fenced area on private property. H.B. 213 Canine Injury Amendments, clarifies liability that the dog owner that attacks is not liable for any injury or death of a wandering dog on enclosed property. This bill passed in the Senate with an amendment that clarified the immunity only applies in situations where the attacking dog is inside an enclosed or fenced area. I voted in support. You can watch the floor presentation here.

This week, the Senate heard H.B. 81 Mental Health Days for Students, which adds mental health as a valid excuse for a school absence. Other states that implemented this attendance policy have seen a decrease in youth suicide rates. H.B. 81 passed in the Senate and was sent to the governor for consideration. I voted in support.

William E. Christofferson, a Cache Valley Native and local hero, was honored in the Legislature this week. William Christofferson served in World War II and dedicated his life to helping veterans. He advocated for veterans across Utah and helped create the first veterans nursing home in Salt Lake City. Read the full resolution here.

To all our Veterans who put their lives on the line of defense, we thank you wholeheartedly.

Did you know Footloose, The Sandlot and The Lone Ranger were filmed right here in Utah? Such films have led to other production opportunities to showcase Utah’s desert beauty and high alpine mountains. The film industry has generated more than 7,600 jobs and $147 million in salaries in our state in 2019. We are considering S.B. 167 Utah Film Economic Incentives, which would provide tax credit certificates for productions, films and series when they film in Utah. This bill would strengthen rural communities by investing in local jobs, stimulating the economy and increasing Utah’s profile as a filming destination. S.B. 167 passed in the Senate on its second reading. I voted in support.  To listen to the bill presentation, click here. 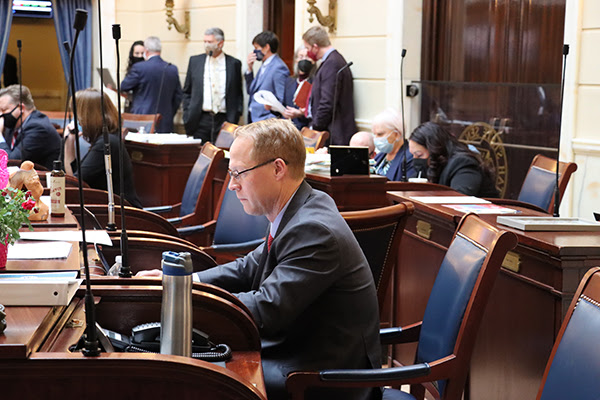 S.B. 165 Offender Registry Revisions, permits an individual who has served their full sentence on the Sex Offender Registry to apply for removal. This bill aims to prevent instances where individuals are kept on the registry past their original sentencing time due to reporting errors. S.B. 165 passed in the Senate on its second reading. I voted in support. To listen to the bill presentation, click here.

S.B. 147 Confinement of Egg-laying Hens, prohibits farm owners from confining egg-laying hens in enclosures that are not considered cage-free housings and sets January 1, 2025, as the self-imposed date to achieve cage-free hen environments in Utah. If we had not passed this legislation the industry would have been extorted by animal rights organizations and forced this issue to a ballot initiative. I frustratingly voted in support.  SB147 passed in the Senate and will now be considered in the House. To listen to the bill presentation, click here.

This coming Tuesday, February 24, I will be hearing HB 302 in the Senate Health and Human Services Committee of which I am a member.

This bill, if passed as written, would prohibit a student of the male sex from participating in an athletic activity designated for female students.

I support this bill. I believe that the gender on the birth certificate of the individual is the gender that should be recognized.

Would you support this legislation or oppose?

Please respond if you are so inclined.